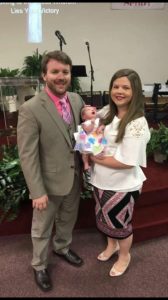 Jack Saucier was born on June 9th, 1989 in Mobile, Alabama. He gave his life to the Lord in October of 2009. Shortly after being filled with the Holy Spirit, he became involved in ministry. Jack always had a passion for music and he found that the Lord would use this in his ministry. He also felt the call on his life to preach the gospel of Jesus Christ and him Crucified. In March of 2010 Jack met who would be the love of his life, Candace Saucier. The two were married in April of 2011 and welcomed their very first child on March 14th, 2017. They were blessed with a beautiful daughter named Graceleigh Ruth Saucier.

Over the years they have filled many Pastoral positions including: praise and worship leaders, youth pastors, and associate pastors. They are currently serving as praise and worship leaders at Cross and Crown FWC since November of 2014. They would both agree that the Lord is doing a mighty work among this body of believers. Over the years they have seen many souls saved and lives changed by the preaching of the gospel; and they are believing God for many more!

Join Our Newsletter and Receive Updates..